Uranium is a commonly-occurring element found in soil, rock and water nearly everywhere on Earth. In some locations, chemical and other conditions create higher concentrations of uranium. These higher concentrations are referred to as ore bodies or ore zones. Uranium is slightly radioactive and is easily fissioned, which is why it is used as fuel for nuclear power plants.

Uranium occurs naturally in two forms (or isotopes), which are uranium-235 and uranium-238. Uranium-235 is the form most commonly used for nuclear energy because the nucleus splits easily when bombarded by a neutron. This process of splitting an atom is called fission. When the uranium-235 atom is hit by the neutron, it absorbs it and splits into two smaller atoms of a different element. When the atom splits, it releases heat, radiation and more neutrons, which go on to bombard other uranium atoms and the process repeats itself in what is known as a chain reaction. Fission is the process by which nuclear power plants produce electricity.

How do nuclear power plants work?

Contrary to popular belief, nuclear power plants do not use radiation to produce power. Instead, they use the heat generated during fission to produce the power, and the radiation is byproduct well contained within the reactor. The heat produced by fission is used to boil water and generate steam. The steam then turns giant turbines to produce electricity. Once the steam has passed through the turbines, it is cooled down and re-condensed to water for re-use.

Nuclear power is clean because it doesn’t burn fossil fuels to pollute the air, and uranium as a fuel is both cheap and very efficient. For perspective on how efficient it is, just one ceramic pellet of uranium fuel the size of your fingertip produces the same amount of energy as 150 gallons of oil, 1 ton of coal or 17,000 cubic feet of natural gas. These pellets are stacked end-to-end in 12-foot metal fuel rods, and a bundle of rods form a fuel assembly. Depending on the reactor design, an assembly can have anywhere from 49 to over 300 rods per assembly, and the reactor may contain over 200 assemblies. For example, a reactor operating 193 assemblies contains over 50,000 fuel rods and 18 million fuel pellets.

That equates to a tremendous amount of fossil fuels. 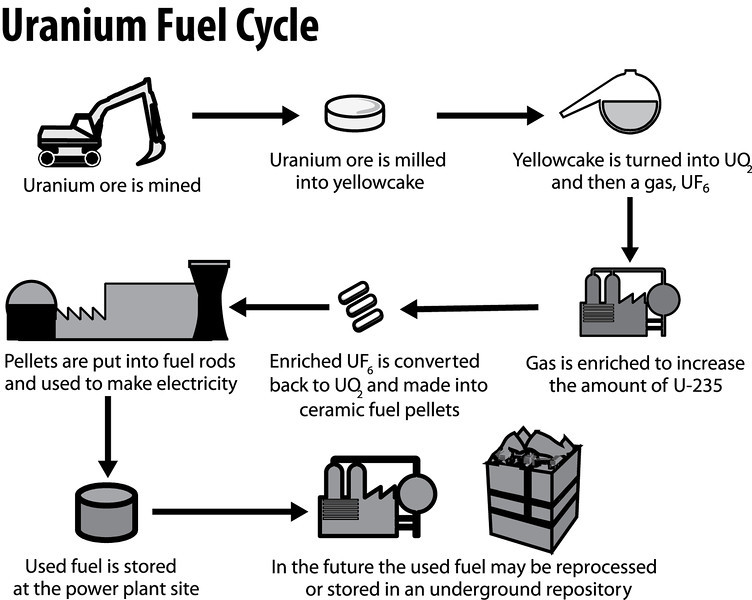