Administrative and workshop structures were completed in October 2015 with the project and operations team now working from this building.

Project staffing numbers continued to increase in the lead-up to the commencement of production.  As at November 30, 2015, a total of 35 employees are now directly employed on the project (excluding construction and drilling contractor personnel). The majority of personnel hired during the calendar year are residents of Crook County or counties close to the Lance Projects.

In October 2014 Strata announced the adoption of a staged and scalable development plan for the Lance Projects.

Strata believes a scalable uranium extraction development plan significantly reduces the initial funding required to initiate sustainable uranium extraction at the Lance Projects, decreases the volume of uranium needed to be contracted and allows the Company to defer most of the planned uranium sales contracts until such time as the uranium price is more attractive. Initial capital expenditure required to reach positive cash flow at the Lance Projects is also substantially reduced.

Commissioning of the processing facility and wellfield operations in Stage 1 also significantly de-risks the Stage 2 and Stage 3 upgrades.

Funding for construction of Stage 1 of the uranium extraction development plan was secured following the $69.4 million financing completed in February 2015.

In December 2014, Strata entered into agreements with Resource Capital Fund VI L.P. (RCF VI), Pala Investments Ltd (Pala), BlackRock funds and JP Morgan AM UK Ltd to raise a fully underwritten amount of $69.4 million (through a placement and rights offering) to fully fund Stage 1 of the Lance Projects through to positive cash flow.

Proceeds from the placement and rights offering were used to fund the remaining construction (which commenced in January 2015) and Stage 1 ramp-up at the Lance Projects through to positive cash flow. All construction and wellfield activities were completed on schedule with the commencement of uranium extraction from the Lance Projects occurring in December 2015. Timing of development of Stages 2 and 3 will be driven by uranium market conditions.

Construction for Stage 1 of the Lance Projects comprised: 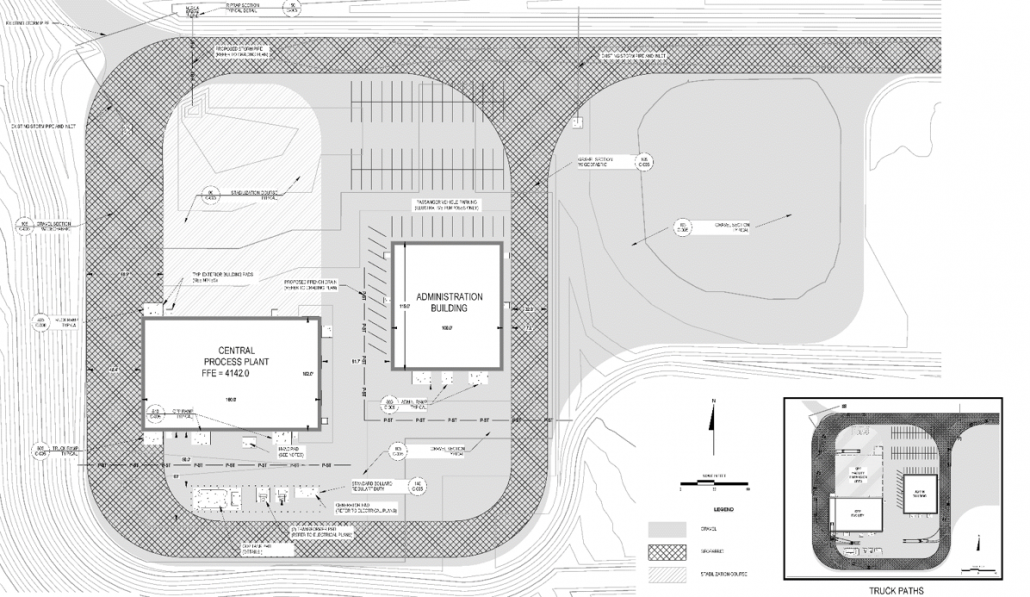 In October 2013, Strata began early stage site preparation for the CPP, fabrication of long lead time plant and equipment and the construction of access roads and other infrastructure. All site civil works were completed in the first half of 2014 in preparation for pouring of the concrete pad for the CPP, including site drainage works to divert surface water around the CPP and associated support services buildings. Fabrication of the long lead pressure vessels (i.e., ion exchange columns and elution tanks) were also completed during 2014. Between February 2015 and the end of June 2015, the foundations and structural building erection for the central processing plant and site administration/workshop buildings were completed. All major items of equipment such as ion exchange vessels and other storage tanks were also installed within the central processing plant during this time period.

Following finalization of the funding for Stage 1, Strata quickly moved to mobilize all contractors to site to complete remaining construction activities. TREC DB LLC, a subsidiary of TREC Inc., was contracted to complete construction of the CPP, administration and laboratory facilities for Stage 1 under a fixed lump sum price.

Stage 1 of the CPP is highlighted in green in Figure 3 below. 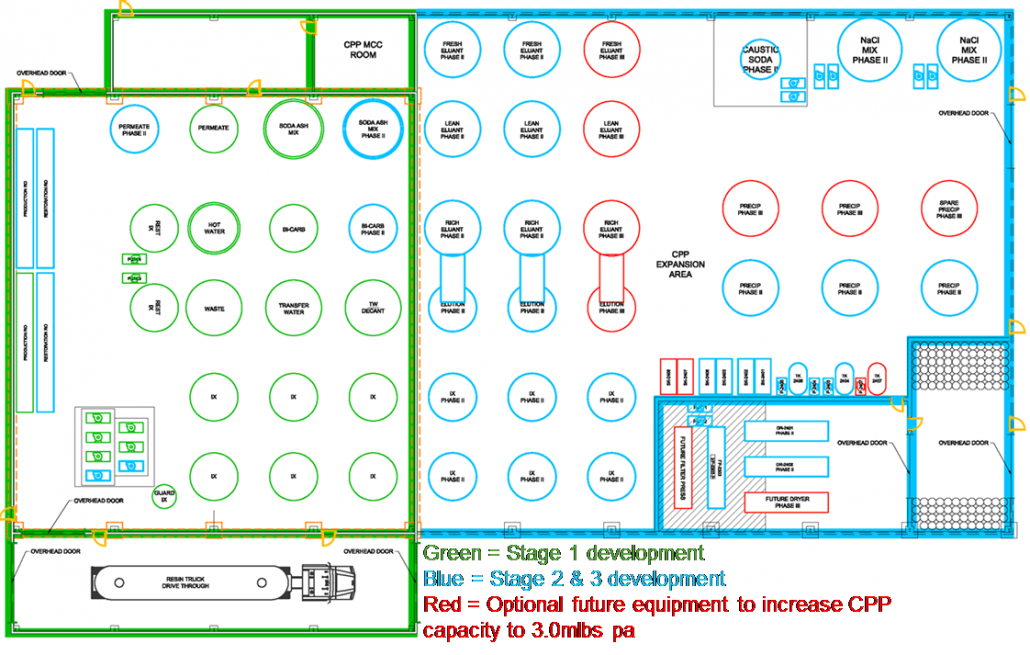 All wellfield development activities are being carried out by Strata’s experienced in-house uranium ISR wellfield and geology team, supported by local drilling contractors.

Early May timelapse of IX tanks being set: