The Lance Projects are located on the North-East flank of the Powder River Basin in Wyoming, USA. The original NuBeth Joint Venture between Nuclear Dynamics Inc, Bethlehem Steel Corporation and later Pacific Power and Hydro (NuBeth JV), discovered thirteen substantial zones of uranium mineralization associated with an extensive system of roll fronts confirmed by drilling between 1970 and 1979. As part of this exploration program, the NuBeth JV drilled more than 5,000 exploration and development holes, totaling in excess of 997,375 yards (912,000 meters). A proprietary database of the historic drilling and pilot plant data was acquired by Peninsula in 2007, defining a then relatively unknown uranium district of which Peninsula is now the dominant mineral rights holder.

The Company has explored only part of this area since 2007 and has already delineated over 53.7mlbs of U3O8 JORC Code (2012) compliant resource.

The Lance Projects have 190 line miles (305 kilometers) of identified roll fronts and an exploration target of 104-163mlbs U3O8, which is in addition to the JORC Code (2012) compliant resource. These roll fronts stretch over 31 miles (50 kilometers) north-south and are open to the north, south and west.

Unlike most in-situ recovery (ISR) projects, Peninsula’s mineral resources are located on contiguous landholdings that we control. This allows Peninsula to develop the Lance Projects in a cost-effective manner, without having to incur infrastructure and facility development costs that would otherwise be required if our landholdings were not contiguous.

The NRC preoperational inspections were held during November 2015, and confirmed that the constructed plant and associated site systems up to the ion exchange columns, including wellfields, indicated that the plant is physically capable of conducting in-situ uranium recovery operations. The NRC also confirmed that written operating procedures and approved radiation safety and environmental monitoring programs were in place, and verified that preoperational testing was complete. 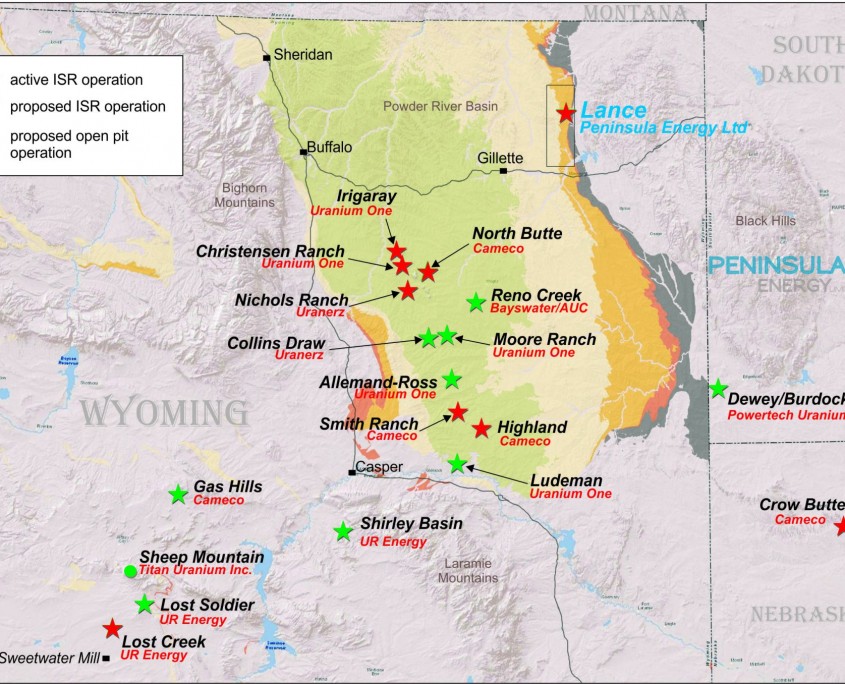 Since the initial injection of O2 and CO2 at the first header house unit on 2 December 2015, production well flow-rates are meeting expectations and substantially confirming the permeability of the ore body, a key risk factor in ISR operations. The Central Processing Plant (CPP) and well field systems are operating as expected.

Due to the 2016 uranium price pull back, the Company reviewed its operating plan during Q3 CY2016 and implemented an interim operating strategy in Q4 2016 until uranium prices improve. Current production is focused on meeting its Lance Projects sourced delivery commitments under existing term contracts. A summary of quarterly production up to March 2017 is below. 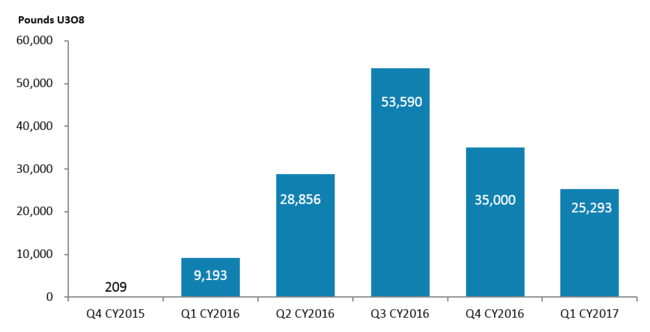 Production to March 2017 has been primarily from header houses 1,2 and 3. Each header house experiences slightly different rates of ramp-up with header houses 3 and 4 taking longer to ramp-up than originally projected. Grade performance through Mine Unit 1 (comprising header houses 1 to 4) has been lower than forecast and inclement weather through the Wyoming winter hampered ongoing wellfield maintenance, with staff often unable to access the wellfield due to the extreme cold. Inclement weather also contributed to delays in the completion of construction and commissioning of header houses 5, 6 and 7 however as at May 2017 uranium is being produced from header houses 5 and 6. Header house 7 remains in re-circulation however is due to be turned to the CPP during May 2017.

While grades have at times tracked below forecast in Mine Unit 1, the Company has seen a solid increase in the grade performance of Mine Unit 2 during initial ramp up in April 2017.

Alkaline leach chemistry continues to be refined as part of ongoing ramp up activities to determine the appropriate mix to optimize the rate of uranium extraction.

Average flowrates from extraction wells within Mine Unit 2 were below forecast during the March 2017 quarter, however the Company is addressing these issues through the implementation of a range of action items including the installation of additional filtration on the injection lines, more aggressive well swabbing and other targeted maintenance activities. It is noted that flow rates in header house 5 and 6 have responded positively during April 2017 to this work.

At present the spot market remains weak and the Company is operating on an alternate operating plan tailored to existing term contracts. The Company will however continue with the roll out of additional header houses, as construction of header houses 8 thru 10 will allow flowrates across all production wells to be optimized and balancing of average uranium head-grades across header houses. Lower operating costs combined with existing high value term contracts should see Peninsula move to sustainable cash generation in the first half of the 2017 calendar year, a significant achievement in the current market.

The Company delivered 100,000lbs U3O8 in January 2017 (sourced from the Lance Projects) and a further 150,000lbs U3O8 (purchased on market) was delivered in March 2017. Revenue from these deliveries was US$13.5 million, resulting in an average realized cash price of US$54/lb U3O8 during the quarter which is more than twice the average spot price for the quarter (UxC average Spot price for the quarter was US$23.96/lb U3O8). Up to 150,000lbs U3O8 remains to be delivered in the 2017 calendar year, with the next delivery currently scheduled for August 2017.

More importantly, the Company recorded positive cash flow from the production, purchase and sale of U3O8 in the March Quarter.

Peninsula currently has up to 7.7 million pounds of U3O8 remaining under contract for delivery to major utilities located in the United States and Europe. Projected revenue remaining under these existing long term contracts is up to US$420 million. These contracts provide a substantial earnings stream to the Company whilst allowing it to retain significant quantities of planned U3O8 production for future contracting during periods of anticipated improved uranium prices.

The weighted average delivery price for these five contracts over the next 10 years is US$55/lb U3O8.

Peninsula continues to negotiate additional product sales contracts with various counter parties and plans to enter into term contracts for an additional 1.0 to 2.0 million pounds of uranium concentrate for delivery over the next five years.

Peninsula has established a dedicated sales and marketing function in order to market and sell the uranium that we expect to produce from the Lance Projects directly to nuclear power generating utilities under long-term uranium concentrate sale and purchase agreements.

By having its own internal sales and marketing team, Peninsula is able to deal directly with the procurement functions within nuclear power generating utilities without the need for intermediaries. Not only does this reduce overall sales and marketing costs, it also enables Peninsula’s executive management to meet face to face with their counterparts from the utilities. Over the past four years, the Company’s marketing efforts have focused on building market knowledge of Peninsula and its plans with North American and European utilities, and positioning Peninsula to participate in the nuclear fuel procurement processes of these utilities prior to production commencing at our projects.

The Company has in place all material licenses and permits required to construct and operate the Lance Projects and to sell the U3O8 extracted therefrom.

The following key permits and licenses have been granted:

On January 24, 2013 Strata announced a further upgrade to the JORC-compliant Resource Estimate for the Lance Projects. This upgrade was achieved by the completion of an additional 676 rotary mud drill holes completed in the seven months subsequent to the March 2012 resource estimate.

The resource, now totaling 53.7Mlbs, has been calculated by applying a combined constraint of a GT of 0.2 contour and 200ppm eU3O8. These cut offs are considered to be appropriate for both calculating and reporting of ISR resources at the Lance Projects.

The measured, indicated and inferred resources are located in host sandstones that have demonstrated positive uranium recovery from test-work. Geological modelling of the extensive down-hole geophysical data has accurately defined the impermeable shale and mudstone horizons that form the confining horizons to the mineralized sandstones.

The Lance Projects covers an area of over 46 mi2 (120 km²) within which there is a combined total of 190 line miles (305 kilometers) of known stacked roll fronts. Of this total, only a small percentage has been explored, with over 90% of the drilling concentrated within the more advanced Ross, Kendrick and Barber areas. Based on the historic conversion rate from roll front length to a drill-defined resource, the exploration target of the Lance Project, which is in addition to the JORC-compliant resource, is assessed at between 104 and 163 Mlbs U3O8. The exploration target is based on an anticipated grade range of 426ppm to 530ppm U3O8. This grade range approximates the minimum and maximum modelled grades respectively.

Please note that in accordance with Clause 17 of the JORC (2012) Code, the potential quantity and grade of the ”Exploration Target” must be considered conceptual in nature as there has been insufficient exploration to define a Mineral Resource and it is uncertain if further exploration will result in the determination of a Mineral Resource.