Having commenced production in late 2015, Ross is the fully-permitted flagship of Strata’s greater Lance Projects. Combined with other areas of the greater Lance Projects, Ross constitutes the largest JORC-compliant* in-situ recovery resource in the USA at 54 million pounds U3O8. As an in-situ recovery (ISR) operation, Ross includes the traditional ISR components of wellfields and central processing infrastructure. Where things get less traditional is in Strata’s use of a scalable development plan, which allows Strata the flexibility to expand operations in response to market conditions while reducing up-front capital costs.

In short, Strata’s large resource and scalable infrastructure mean the company is optimally poised to capitalize on a growing global uranium market, with the Ross Project serving as the foundation.

Administrative and workshop structures were completed in October 2015 with the project and operations team now working from this building.

Strata’s approach at the Ross Project is that of a multi-stage, scalable development plan. This plan allows for optimal capitalization of market conditions while supporting the long-term development of the greater Lance Projects.

Commissioning of the processing facility and wellfield operations in Stage 1 also significantly de-risks the Stage 2 and Stage 3 upgrades. Timing of development of Stages 2 and 3 will be driven by uranium market conditions.

Construction for Stage 1 of the Lance Projects comprised: 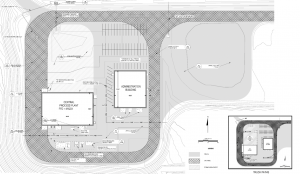 Stage 1 of the CPP is highlighted in green in Figure 3 below. 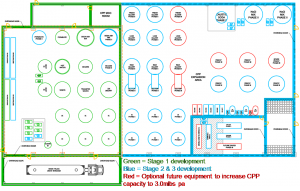 All wellfield development activities are being carried out by Strata’s experienced in-house uranium ISR wellfield and geology team, supported by local drilling contractors.